For those who are curious - this is the flag of St. Piran, the patron saint of tinners and of Cornwall. The white cross represents molten tin oozing out of a black rock used by Piran (born c. 480 AD) in the building of his fireplace. As the flames got hotter, the tin smelted out of the rock. This led to a resurgence of the tin industry.

Webmaster never travelled much east of Camborne, that is, "up-'underd" until he was 18!

That was well up-'underd, in fact a long way up towards England, you know.

The main reason for not travelling abroad, into the next parish, let alone the next Hundred (Kerrier), was that Father was a farmer and life wasn't easy, tending the land as we did. My main job was tending the orchard where we had the pasty trees. These were hidden in among the quince and the crab apple trees, where the Visitors wouldn't ever get to see them.

There seemed to be a lot of mystery about all this, although why, I never could tell. I took a Visitor in to see them once, as a special treat, but he said he couldn't see them at all!

Damn funny, thought I, where the h*## do 'e think the pasties d'all come from, then?

Tending the pasty trees was an everyday job, even in the winter time, when the pasty buds were dormant. The busy time, apart from the picking season, in spring and summer, was the pollination of the new pasty flowers in the very late summer, after the Visitors were gone.

This had to be done early in the misty early morning, by hand, with a rabbit's-fur brush, because the pollen is so very light, you see, that the slightest breeze will take it away from the female pasty flower and you d'get a very poor crop if 'e idn't dunn right.

Of course, what I'm telling 'ee above is all about the cultivated pasty trees, what a lot people much prefer is the the rare and much sought-after gourmet cliff-top wild pasty. These are plantation escapes whose seeds have been spread by low flying shite'awks. The harsh cliff-top conditions mean that the crust has to be cracked with a mallet, but, oh, the concentrated flavours within .......

If you want to see a proper Pasty link - CLICK HERE.

To see a Pretenders' Pasty link - CLICK HERE - this is the story of the Devon pasty - that's the one with its crust sticking upwards!  That web page says to ignore what is told about "hen" and "cock" pasties but there is truth in it, depending on whether its made by a left-handed woman or a right-handed woman. This determines the direction of the roll in the crust when the join is being second-crimped. Most pasties are made by right-handed women and these are the "hen" pasties. When a left-handed woman makes a pasty then its the rarer "cock" pasty. Again, there is no mystery, its as simple as that . .....

Of course, a hen pasty is more comfortable in the left hand of a right-handed person if you have dirty hands and want to use the crust to hold it by because of its natural curl and the grip of your finger-tips. A left-handed man is better off with a cock pasty for the same reason and should really try to find a left-handed woman to make his pasties.

Also, it is not correct in saying the side or top crust doesn't matter - it makes all the difference! If your hands are dirty down in the tin mine or out in the fields then the crust is the "handle" you hold it by - the Devon top crust simply doesn't work so well. As it is, you do find top-crust pasties in the east of Cornwall due to the influence of neighbouring Devon .....

A bearded sea fisherman represents the county's maritime connections, and he stands opposite the tin miner, a reminder of Cornwall's great mineral wealth and pioneering industrial heritage. Above the shield rests the Chough, a relative of the Jackdaw with blue-black plumage and a distinctive curved red bill. The Chough used to proliferate on the cliffs of Cornwall, but is now almost extinct in the county, although conservationists are working to re-establish it through breeding in captivity. The bird rests its claw on a Ducal Coronet. The Duchy of Cornwall, which includes land in Devon, London (for example, the Oval cricket ground) and the Scilly Isles, has long been the inheritance of the Queen's eldest son, as is the title of Duke of Cornwall.

Like the county itself, the shield is enclosed by waves, and at its heart is the history and mystery of the golden roundels or 'bezants'. Many fanciful guesses have been made about their origin, although no-one is really certain how the county came to adopt such a bold graphic symbol. Nowadays 15 bezants appear arranged in an inverted triangle, but earlier Cornish emblems show them used as a border, or arranged to fill a whole shield.

Among the more colourful conjectures is the tale of the King's eldest son, captured by Saracens during the Crusades. Loyal Cornishmen, it is said, helped to raise the ransom of 15 golden coins, or bezants, named after Eastern Europe's Byzantium. The shield is thought to commemorate this King's (or more properly, Prince's) ransom, with the legend 'one and all' noting a splendid joint effort by Cornishmen to save their Duke of Cornwall. Whether referring to this particular event or not, this well-known phrase still indicates Cornwall's community spirit, but is also the very best description of a Cornish welcome.

This is Cornwall County Council's coat of arms, properly referred to as a 'full achievement', and was registered with the College of Arms in the 1940's. It uses elements which have traditionally appeared on other heraldic devices associated with Cornwall over centuries.

Source: http://www.cornwall.gov.uk/faq/ - this link no longer works and there seems to be no other description of the the county's coat of arms on the Cornwall County Council web site. A sign of the times? 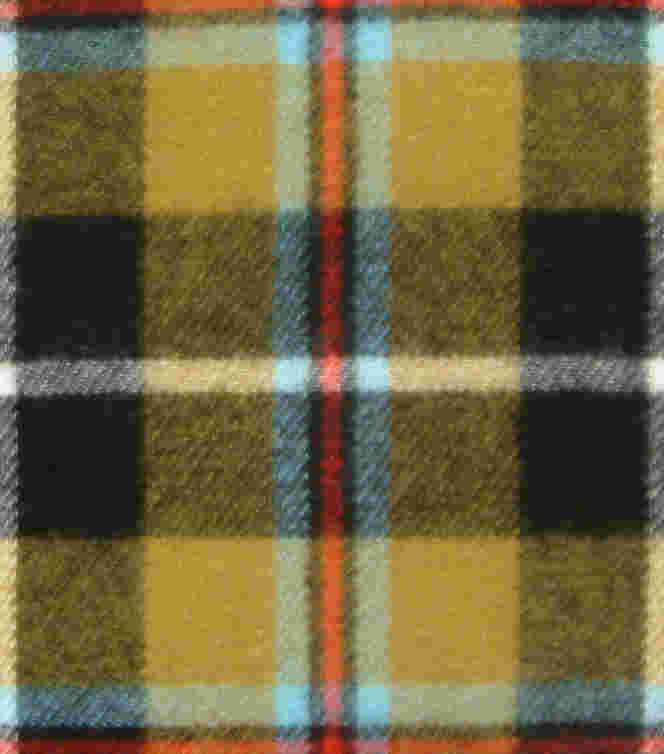 The Cornish tartan reflects the colours of Cornwall

Blue represents the sea of
the Cornish coastline

Black and white represents the
flag of St. Piran 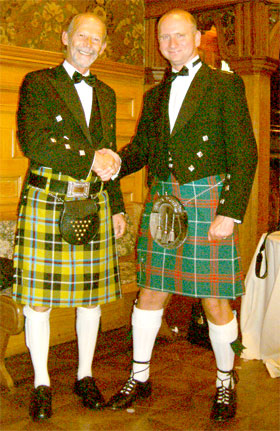 Webmaster (left) greeting a Welsh kilt at the wedding of an Irish nephew
in a baronial hall near Loch Lomond, Scotland, where
Irish, Scottish, Cornish & Welsh kilts were the order of the day

Cornwall's National Anthem
Traditional - Based on The Song of the Western Men, by RS Hawker
on the "Trelawny's Army" web site

A good sword and a trusty hand,
A merry heart and true!
King James's men shall understand
What Cornish lads can do.
And have they fixed the where and when?
And shall Trelawney die?
Here's twenty thousand Cornish men
Will know the reason why!

Out spake their Captain brave and bold:
A merry wight was he:-
'If London Tower were Michael's hold,
We'll set Trelawny free!
We'll cross the Tamar, land to land,
The Severn is no stay:
With 'one and all' and hand in hand,
And who shall bid us nay?

'And when we come to London Wall,
A pleasant sight to view,
Come forth! come forth ye crowds all,
Here's men as good as you!
'Trelawny he's in keep and Hold:
Trelawny he may die:
But twenty thousand Cornish bold,
Will know the reason why!'

Based on The Song of the Western Men, by RS Hawker