A Story of Plymouth's Past(ies)

Reproduced with permission from Trufflehog, 2012

The Cornish Pasty has to say "Wow - what a book!"  It is written, illustrated and designed by students at Plymouth University, linking with a project involving pupils from Lipson Vale Primary School and Lipson Community College.  The publication project was a real-life working experience for the learners that brought to life some of the South-West's heritage.

As webmaster of The Cornish Pasty & Pastypaedia, and, according to some, no mean pasty-maker, I feel that I (KR) have a fairly wide knowledge of the world of pasties. However, this new, and very local, book has taught me thing or three about the subject. With that being the case, I have to say that the book is a really good 'read'!

At first look, the pages are simply crowded with little nuggets of information, they are also visually attractive with a patchwork of graphics that any of us would be proud to say were our own work. The first two pages alone carry a wealth of information (as they all do), all of it easy to read and assimilate. It includes, among many other things, the stories about the crust and its purpose, fishermen and pasties and the fact that Cornwall and Devon were both involved in the development of the pasty as a popular meal.

The second spread of pages has the headings 'The Posh Pasty' and 'The People's Pasty'. The Posh Pasty is about what is called The Plymouth Pasty (on this web site), dating back to 1510, and refers to official accounts of the then-Borough of Plymouth where it can be seen that a civic banquet incurred costs to do with the making of venison pasties, eaten with claret and red wine. This section also mentions Chaucer, Shakespeare and Pepys. The People's Pasty is about what ordinary people would have had. Among other items, there are some alternative names for pasties, my favourite, which I had never heard before - despite living in Plymouth for forty-two years - was the 'Devonport mouth organ'!

The third spread of pages describe the old pasty-makers of Plymouth, men like Selleck, Risdon, Uglow and Stephens. One of them goes back to the 1830s; these were all new to me.

The fourth spread introduces Ivor Dewdney who was baking pasties in the 1920s. His father, William, and brother, Clifford, were also involved. The next spread of pages describes life in wartime Plymouth, with the blitz, rationing and the struggle to keep making pasties in times of shortages.

Ron Dewdney is introduced in the next spread of pages in 1957 when Clifford Dewdney died just as his new shop was getting under way. Here, you can read about the Crimping Queen and how many million pasties she made! There is also a section about support for the Armed Forces and how to tell a Ron Dewdney pasty from an Ivor Dewdney one! NB. The Ron Dewdney shop is now owned by Ivor Dewdney (informed by email 28th Jan. 2016).

The last few pages are about pasties generally, from chicken tikka to second-hand bacon ones - perhaps not for me! Two-course pasties are mentioned, with meat and veg at one end and a sweet at the other (see Pasties with "afters", Pasty with "afters" - American TV show, Finnish Miners' Pasty, Cornish Whole Meal Pasty, American Iron-Miner's Pasty and Morrisons Tin Miner Pasty on this web site and and Sweet-savoury pastie (BBC News). There are several hints and tips garnered from all over Plymouth concerning family favourites etc. in the making of pasties. You can also learn why it's important to mark your pasty with your initials! Best of all, for would-be pasty-makers, there is a lot of information about how to make a Proper Pasty, following the Classic Pasty recipe.

All in all, as an exercise in publishing and researching local history, this is a jolly good read, in fact - its brilliant!

Newspaper article in The Herald about the book launch 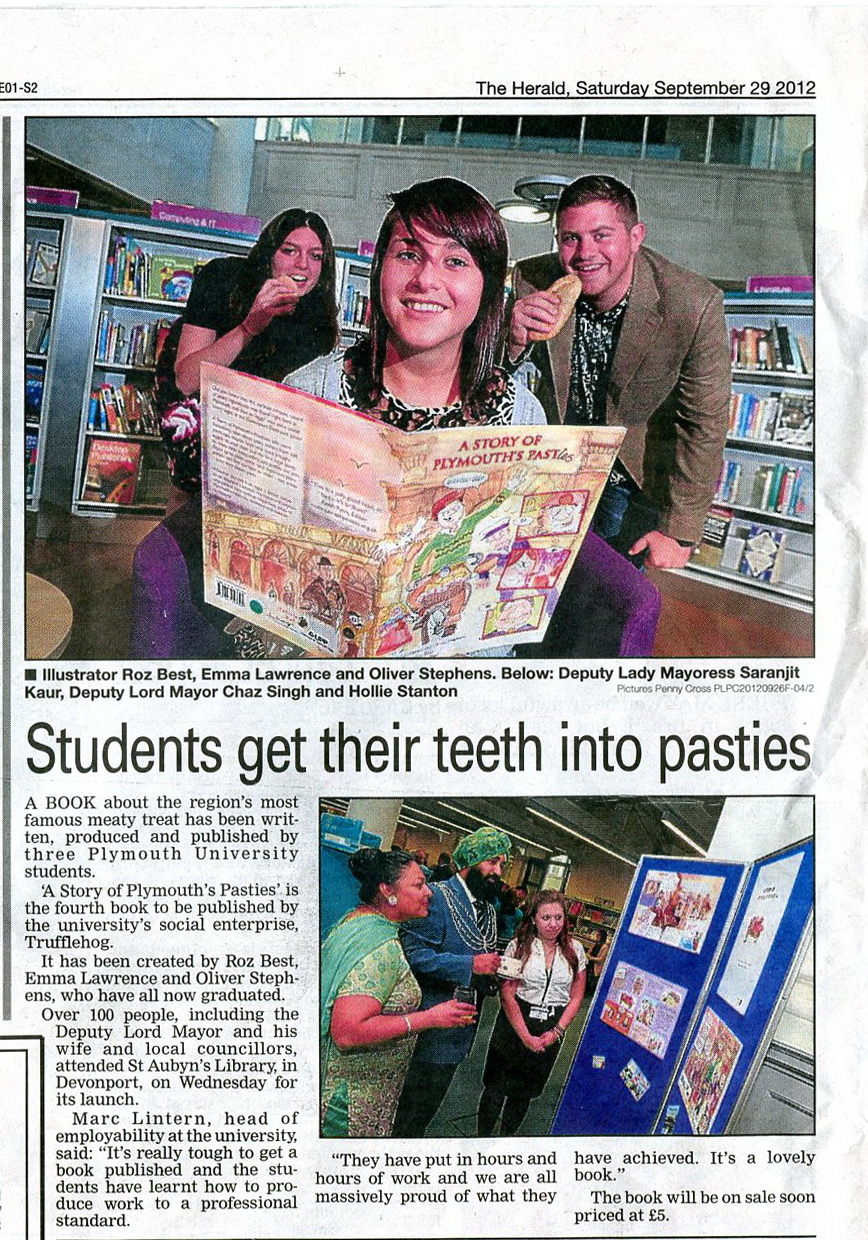 Copyright: Image reproduced by kind permission of The Herald. The original article may be viewed online here