The Cornish Pasty already has a Giant pasties page, but there is a famous custom in Cornish Rugby of parading a really giant pasty at important matches. This goes back over a hundred years, to 1908. The photos on this page are from more recent times ..... 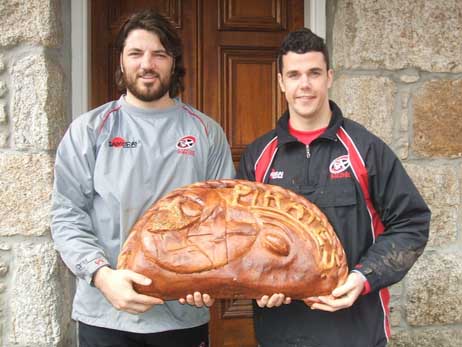 Photo by Phil Westren
Giant pasty with Cornish Pirates rugby team members
French No. 8 Bertrand Bedes (left) and Cornishman Adryan Winnan
holding a giant pasty made by WC Rowe's, Cornish Bakers, for the
Giant Pasty Parade at the St Piran's Festival, 8th March 2009,
in the match against Bedford, culminating in passing the pasty
over the posts at 2.55 pm, five minutes before the kick-off.
The honour was done by the Falmouth Marine Band.
(the new web site no longer links the parade news item) 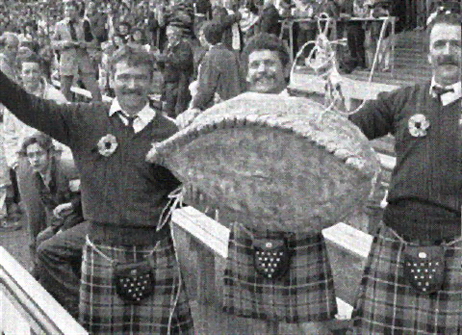 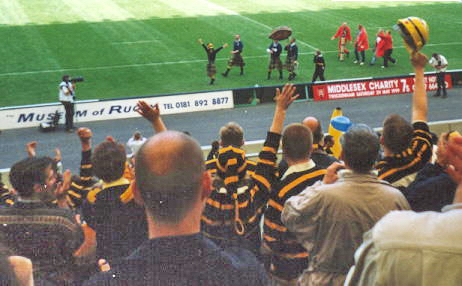 According to the Crantock Bakery web site, the Cornish rugby pasty tradition started in 1908 when a pottery in Truro (Lakes Pottery) made three ceramic pasty mascots to mark the first appearance of a Cornish team in a rugby championship final.

We are very grateful to:

To the above, grateful thanks from The Cornish Pasty.