The Cornish Pasty presents another page that must reside in the section headed Things only a Cornishman can tell 'ee about pasties for the time being, until science finally proves the case! 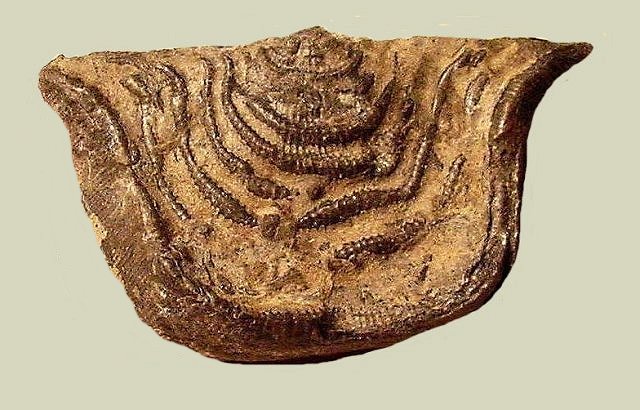 The web site that shows this image describes it as a "miscellaneous brachiopod" but to a knowing Cornishman it looks mighty like an early decorated pasty!

The specimen above looks like Devonian pasty (or possibly Cornubian) - not to be confused with a Devon pasty which evolved several million years later and turn out to be phylogenetically distinct. Who would have guessed!

No-one knows for sure why they became extinct - maybe it was something to do with global warming at that time in the geological record, or rising sea-levels, or perhaps the first situation led to the second?

For some further erudition on the Devonian period .....

Wikipedia - Devonian ............   360-415 Mya
The period is named after Devon, a county in south-western England, where Devonian outcrops are common. While the rock beds that define the start and end of the period are well identified, the exact dates are uncertain. According to the International Commission on Stratigraphy (Ogg, 2004), the Devonian extends from the end of the Silurian Period 416.0 ± 2.8 Ma, to the beginning of the Carboniferous Period 359.2 ± 2.5 Ma (in North America, the beginning of the Mississippian subperiod of the Carboniferous) (ICS 2004). .......... In nineteenth-century texts the Devonian has been called the "Old Red Age", after the red and brown terrestrial deposits known in the United Kingdom as the Old Red Sandstone in which early fossil discoveries were found. Another common term is "Age of the Fishes", referring to the evolution of several major groups of fish that took place during the period.

This means that fossil pasties are at least 360 million years old. Another coup for The Cornish Pasty!