After much discussion and thought within the family about the Cornish pasty, I believe we have come up with a better version of the pasty with "afters", said to be the traditional Cornish miners' pasty. 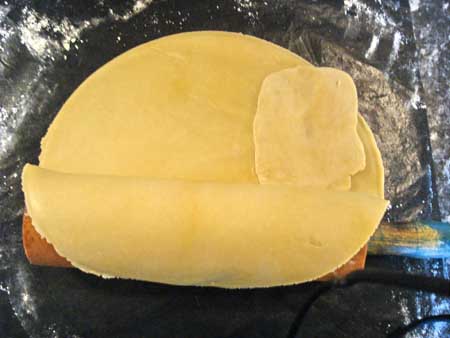 Pastry base for the pasty, with half supported on the rolling pin
and with an extra piece of pastry in place to separate the two fillings.
This extra piece is wetted with milk at its left edge
and pressed down in place like a hinge. 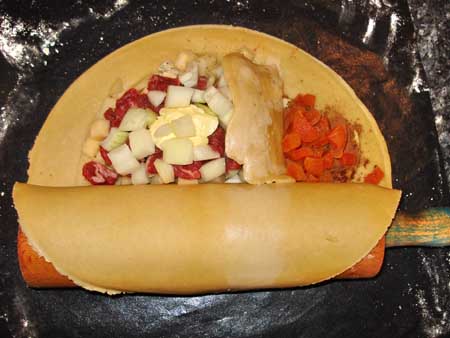 The pasty is filled with the two fillings: skirt beef, potato,
yellow turnip (i.e. swede), onion, butter and seasoning on the left,
with a thick slice of apple, brown sugar, cinnamon and chopped,
dried apricots on the right. The flap of extra pastry is wetted for sealing. 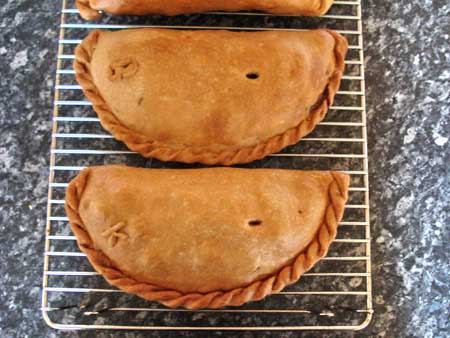 The pasties were closed, pressed and crimped,
with steam holes at the meat end and our initials at the afters end.
My wife wanted apple and fig again, so we needed to know which was whose!
PS - Just look at my crimping! 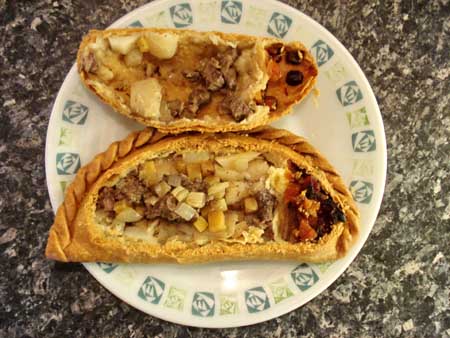 Fresh from the oven, the top of this pasty was removed to see how it looked.
The afters end is on the right, and seen in close-up in the next photo. 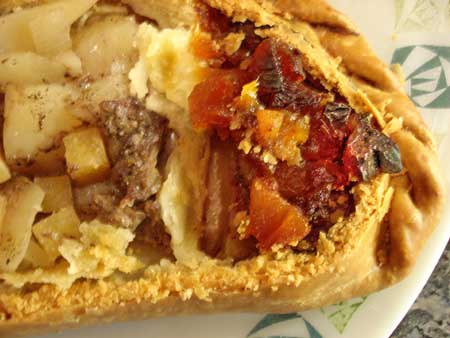 The afters end of the pasty - this one was apple and chopped apricot.
It really was 'andsome!

I believe this is probably the best way to make these pasties. It was easy using the flap of pastry compared to the bridge of stale bread. Also, the bread absorbed moisture and shrank to very little whereas the pastry flap did not, thus keeping a better structure to the pasty after baking.

Having sorted out this question, I have just been informed that Jethro, the Cornish comedian, maintains that the original pasty actually had three compartments - there was an extra, little one at the very end for your After Eight mint .....

Again, The Cornish Pasty brings you nothing but the facts .....