The Cornish Pasty has had a long ambition to present the official definition of the word "pasty".

The text below is from the ultimate authority of the English language - the Oxford English Dictionary. It is subject to strict copyright conditions and having met them, we are proud to present it below. 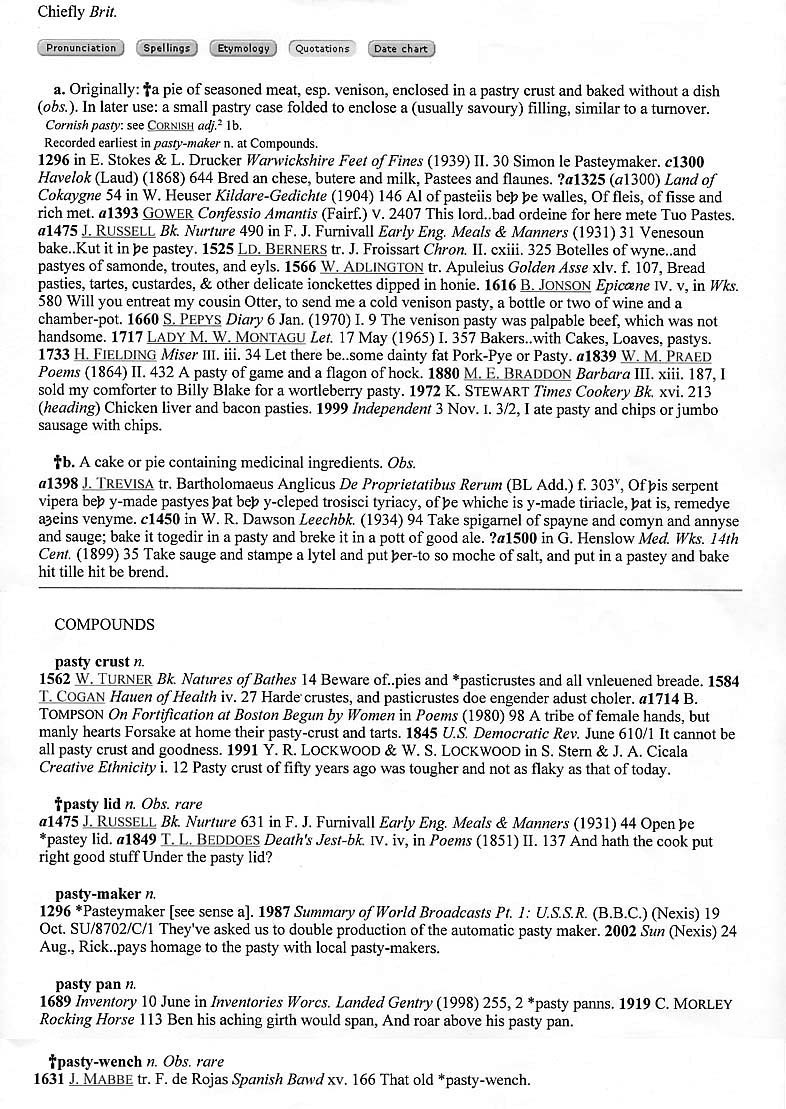 The main entry (a) defines a pasty as a pie of seasoned meat enclosed in a pastry crust and baked without a dish. It says that venison was the usual meat - this was recorded frequently by Samuel Pepys. The entry goes on to say that later use applies to a small pastry case folded to enclose a filling, which is usually savoury, similar to a turnover."

It also records the earliest use of 'pasty' is from 1296 in E. Stokes & L. Drucker Warwickshire Feet of Fines (1939)  II. 30 Simon le Pasteymaker. We will try to find this reference for further detail.

The second entry (b) records that "pasty" was used for a cake or pie with medicinal ingredients.

So there you have'n! Most of the above relates to 'pasteys of olde' which were ornate pies and is nothing to do with Cornish pasties. It notes later use applying to small pastry-enclosed fillings similar to turnovers. It also mentions "Cornish" as an adjective which then tells you it is something to do with Cornwall. There is no mention of crimping or hen and cock pasties.

You may notice  a strange symbol in the text above -

. The item before the first "e" is lower case "thorn". This is a symbol representing the letters "th" written together as one entity. It has origins in Icelandic and old Anglo-Saxon, also it is a borrowed runic form from Latin. There are various ways of writing it by hand.  Its use in Old and Middle English manuscripts probably came about because monks who were transcribing documents found it useful as a form of shorthand and in the word "the" the appearance of thorn and "e" together led to the word "ye".

Thorn can be written in most fonts by computer .....

Other unusual characters can be found in:

As ever, The Cornish Pasty endeavours to bring 'ee only the facts about pasties .....

Acknowledgement: We are grateful to Oxford University Press (Permissions Dept.) for their help and permission to use the image above on The Cornish Pasty.